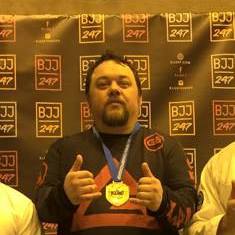 My journey in BJJ started on Wednesday 26th March 2014 which is a date that will stay with me forever as this was the moment I feel I was re-born. On that day I walked into Gracie Barra Glasgow standing 5 feet 4 inches tall and weighing 127kg. I was very unfit and very unhealthy. Just before I had been to the doctors and had blood tests done and was advised that I was borderline type 2 diabetic and also suffering from chronic anxiety and if I didn’t change my unhealthy lifestyle that my health was at serious risk.

I had been friends with my Professor Ricky Gillon on Facebook for about a year before I joined and had been following the progress of his gym and his students. I contacted him one day and said I was interested in coming to the gym to train and he invited me to come in and chat with him. I went in on Monday 24th March 2014 and chatted with him and explained that my fitness levels were non-existent and I would only be able to commit myself to about 2 classes per week. On chatting to Ricky he explained all about the etiquette of the gym and the history surrounding his gym and Gracie Barra. Ricky also explained that I could take the classes at my own pace and my fitness levels would improve by continuing to come to classes so I agreed to come in on the Wednesday for a free class.

The Wednesday class for me felt like one of the hardest things I had done in my life as I struggled due to my fitness levels but I managed to get through the class and signed up for a membership straight away. After 2 weeks I did get a feeling that maybe BJJ wasn’t for me and I considered quitting and I didn’t go back for about 2 weeks. Something made me pull myself together and get myself back to the gym.

After 6 months I got my 3rd tab on my white and at that time I worked in a bank. I spoke to my work changing some of my shifts so as to allow me to attend the advanced classes. They declined this so I decided to quit as I now saw BJJ as no longer a hobby but a lifestyle and one that I wanted to commit myself to and I wasn’t going to let anything stop me from my passion.

It has now been over a year and I have went from 127kg to 96kg, my fitness levels are better. The type diabetes that the doctor tested me for is gone and my health is no longer at risk and I feel like a new man. My diet has also changed from fatty foods to a combination of juice plus shakes, salad and chicken. I also entered my first tournament back in November 2014 which was at the BJJ 24/7 Liverpool Open. Although I felt I did not perform as well as I could have I still managed to win gold in the GI in my weight division, silver in the no-gi and bronze in the absolute. This was a great feeling as at the start of 2014 it was something I could never have imagined. I have also recently won double gold at the Scottish Open and double bronze at the Manchester Open.

I now attend the gym every day of the week to the fundamental classes, the advanced classes and the black belt classes with my 17 year old son who has the same passion we all share for BJJ except a Sunday when I take my daughter to the Future Champions class at the gym. I received my blue belt on the 28th January 2015 and it was one of the greatest achievements in my life.

The other students and coaches in the gym have been very supportive and pushed and encouraged me every step of my journey and it has been an honour and a privilege for me to be a part of this gym and the Gracie Barra Glasgow family.

Professor Ricky explained to me on day one that he could change my fitness and if I chose to compete that he would make me a champion. Everything the professor told me would happen has happened and for this I am truly grateful. As I said Wednesday 26th March 2014 was the day I was re-born. I owe everything to my professor Ricky Gillon as he saved my life and Gracie Barra and BJJ gave me a new one. Jiu Jitsu saved my life and my journey continues.